Welcome back to another book review!

I shall be titling all my reviews under the category of In My Opinion, since everything written will be my own opinion. As always it’s done by yours truly, and sponsored by The Victor Foundation.

This post I’ll be covering a trilogy I started over the summer and just finished the other night by the prolific author Brandon Sanderson called Mistborn. Consisting of the books The Final Empire, The Well of Ascension, and The Hero of Ages. 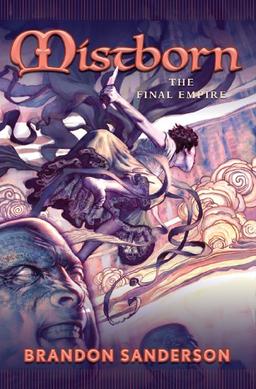 The Mistborn trilogy is an epic of epic high fantasies, and regarded as one of the best works of fantasy to come out in the past decade or so by many avid readers of my generation. The story takes place in a desolate world that seems to be at the end of its life and has been rapidly approaching it for some time. There are volcanoes that spew ash into the sky constantly and every night mists creep out into the world and occupy everything. Most people are terrified of the mists, but no one knows where they come from. The world has magic in it, called Allomancy, and in a nut-shell it’s the ability to have certain powers based on “burning” different metals. If someone is able to “burn” pewter, then they get super strength. Burn tin, and enhance senses. Etc. The plot is that this world has been dominated by a Lord Ruler for a thousand years and he’s been doing a pretty awful job at it. He keeps an entire population of slaves handy for a rich society of nobles to use as they see fit.

And that, friends, is where we pick up our story.

The best way I can see to break this down is book by book, so here we go…

Book 1 – The Final Empire: This was a good book. The main characters were awesome, they grew as the story progressed, and they grew on me the more I read. At first a lot of the characters seemed too… cookie cutter? Too… already done before? They seemed like characters I had heard in dozens of other stories before and they had no uniqueness to them. But after about half way through the book, they developed their own personalities and I started to actually chuckle at a few of their conversations.

The plot was good and is pretty much the only thing that kept me going through this series. Assassinations, rebellions, wars, spies, death, betrayal. It was all there and done well. And the pacing of the plot was good, too. It didn’t drag at all, and there were equal parts contemplation by the characters, and action or conflict in the story. All in all, the first book got two thumbs up from me.

Book 2 – The Well of Ascension: This book sucked. Flat out, straight up, no way around it. This book was boring as hell and dragged from chapter four till the end. The plot didn’t go anywhere and took forever for anything to be resolved. I felt like so much time was wasted in reading the second book. The characters were LAME. So many chapters were pointless thoughts and ramblings of characters that were absolutely useless to their development or the overall story. The second book, I guess, opened up the world a bit more and let us see how the characters act when there is nothing to do. Which, you know, doesn’t make for a good story. I was really disappointed with the second book. To the point that I almost didn’t pick up the third. But I did.

Book 3: The Hero of Ages: First and foremost, I have to say that I went into this book with a bad attitude after reading the last one. I was not expecting much, and it turns out I wasn’t disappointed in that regard. The story picked up a little bit, but took a different direction than I hoped for and sputtered out at the end. The characters got better, much better when compared to the second book, and the pacing was actually noticeable in this one. The plot was also good again, which was a plus. But it did drag on in many places, and fell back into the habit of wasting a entire chapter for a character to ponder whether they should do something even though they know they’re going to do it in the end. It’s hard to explain, but pretty frustrating. That said, Brandon Sanderson did a good job bringing a end to the series. The action and conflict was good, the twists that I’d been waiting three books for did surprise me and I enjoyed them. The third book was a much better book than the second, but not as good as the first.

When all is said and done, I honestly probably wouldn’t recommend these books to others, unless they are hardcore readers and looking for a really big world to get into. i.e., if you’re looking to waste a lot of time. And that verdict hurts me, because I took a writing class by Brandon Sanderson and held to this belief that since he was giving awesome advice for writing and navigating the world of publishing, he must be a great writer himself. And though he is prolific as hell, his craft and prose is almost nonexistent. I was pretty let down with this series.

The world, the magic, the plot was so freaking cool. But the delivery was not able to handle it. In my opinion.