The Star Wars EU is so large, it’s almost unending. To me and my fellow story lovers, that’s not a bad thing. The EU contains some of the best characters available in Star Wars. Period. And it just so happens that one of those characters is featured in today’s In My Opinion Review.

Ladies, gentlemen, Rodians, I present to you Star Wars: Solider for the Empire by William Dietz.

This story comes straight to you from the early 1990s, a time in Star Wars equivalent to the Wild West of America. There was little form or planning taking place in the literature realm of Star Wars back then, so readers were getting graphic novels, comics, and novels that weren’t connected in any significant way and didn’t change the Star Wars universe too much.

Then something changed. I credit that change to a few fan-beloved characters. Thrawn, for example. Mara Jade. And, my personal favorite, Kyle I’m-not-a-Jedi-oh-wait-changed-my-mind Katarn. Kyle Katarn is the star of several SW video games, including the Jedi Outcast series, as well as headlining several novels. Soldier for the Empire attempts to show the readers Kyle’s first steps into a plan larger than himself. It shows Kyle’s first contact with the rebellion and how he was trained to be such an excellent agent. It’s essentially fan-service, giving SW fans more of what they want. That said, let’s dissect it for a review.

I would like to note real quick: this is considered a graphic novel, though it wouldn’t be labeled as such compared to today’s graphic novels. The artist, Dean Williams, spent a lot of time working on the art for this story, and actually won two international awards for his contribution. I wish I could find more of his work online so I could post here to show you. He’s a darn good artist. I like his stuff so much, check out his official site here. He’s still doing freelance artwork for comics and stuff today! This guy is legit.

PLOT: A long time ago in a galaxy far, far away a young man joined an Imperial Academy in the hopes of making his father proud and earning a name for himself in the ranks of the most powerful government entity in known space. Too bad none of that actually happens. Soldier for the Empire, while small, manages to tell quite a lot of story. There are really two main plots that mingle with each other about halfway through in order to complete the story. I don’t want to spoil too much, but you know how in official canon it states that Jyn Orso stole the Death Star plans? Well, according to Legends, it was actually Kyle sure-I’ll-take-a-lightsaber-but-I’m-not-giving-up-my-blaster Katarn. 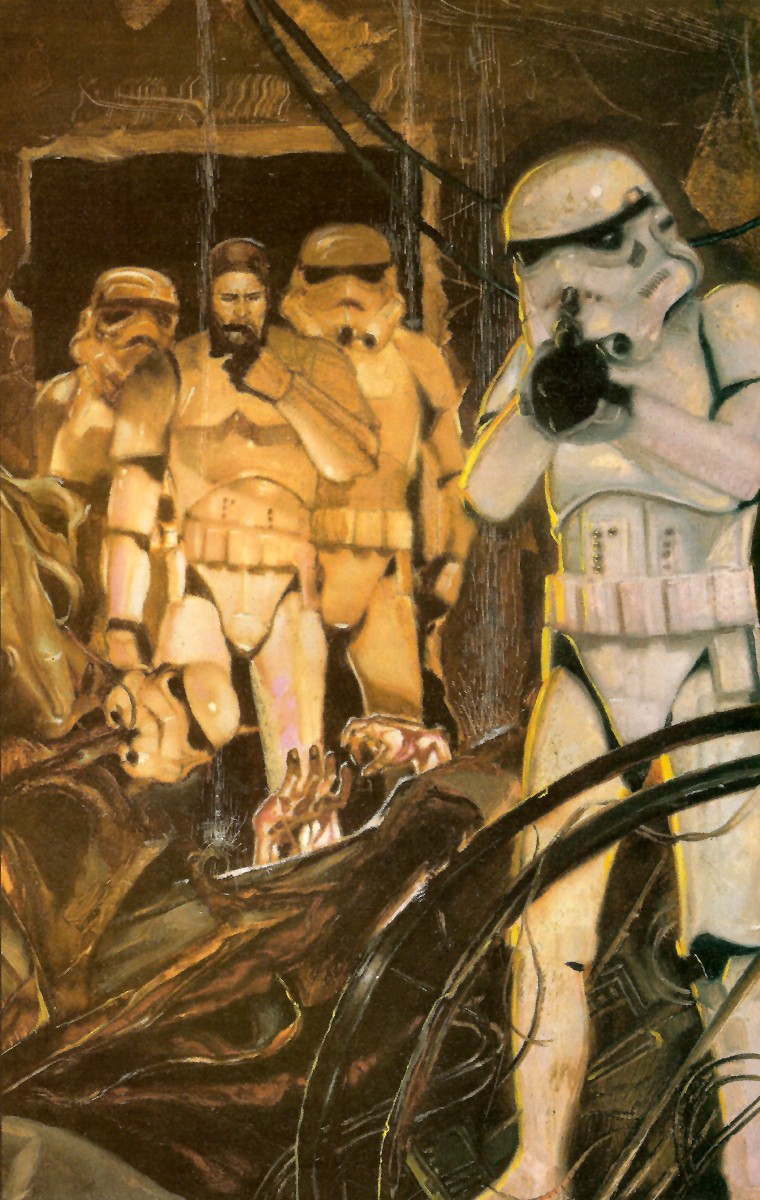 SETTING: Though Dietz’s writing style was most lacking throughout the tale, one thing he excelled at was placing the reader in the same place as the character. He did a fantastic job of using concrete sensory markers to make me feel like I was seeing what the character was seeing, like I was amid the action which the characters are caught up in. Just in this short, seven chapter story, the reader is taken to several planets aboard several different ships with many different people, and each setting felt unique and contained in itself. Nothing seemed to blend or feel repeated or reused. Quite good fundamental science fiction writing.

CHARACTERS: This was something that I feel Dietz slowly grew more into throughout the story. Dietz himself, I feel– and this in no way is an insult– is not an extremely interesting person. And that comes off in his writing, but only in the beginning. There is some exciting stuff happening in the opening of the story, but it’s all framed in this somewhat bored, completely unenthusiastic narration. My theory is that Dietz isn’t very interesting, so it was harder for him to make his characters seem interesting. He managed, don’t get me wrong, it just… took him about 30 or 40 pages. Kyle in the beginning has no humor, no personality really. But by the end he most assuredly does. And that’s how a lot of the characters are; when you first them they all seem one-dimensional, the opposite of dynamic. But on their respective last pages, each one is fully developed with passions, feelings, and fears. Still, I’m a little disappointed that Kyle I-hate-the-Force-but-also-I-love-it-too Katarn wasn’t fleshed out more.