Writing is not as easy as it seems.

Well, that’s not entirely true. Writing is pretty easy, you just sit down and put letters together to make words, which make sentences, which make paragraphs. What I meant to say is, writing quality fiction is not as easy as it seems.

I have good news and bad news to share with you. The good news: I finished writing the novel project I was working on. Cue celebration.

It’s not easy for me to admit that what I just spent everyday for the past 4 months working on is pretty crappy, but it’s truthful. I’m not going to cling to this awful manuscript and claim that all the beta-readers and editors are wrong. The truth is the novel sucks. However, it is salvageable. 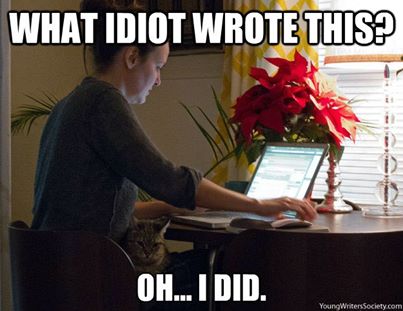 There are so many aspects of writing that must be present in a story for it to be a good read. You’ve got description, dialogue, characters, action, plot, climax, pace, vocabulary, nuance, exposition, theme, point of view, etc. I could go on. If any ONE of those aspects is missing in a novel it usually is not widely accepted, and often time readers can tell that something just feels like it’s missing from the work. Of all of these aspects theme, plot, and characters are the most important. They must all be present and they must all be in equal parts. If the story focuses on characters instead of plot, it’s boring because nothing is happening. If it focuses on plot and not characters, the reader doesn’t care about what happens to the characters, they’re not invested. If there’s too much theme the story reads like an overt message from the author or a thinly veiled political statement. After I finished the novel I was working on, a Black Beetle novel, I immediately read through it again with only light editing. And when I got to the end I realized there is absolutely no theme in the story. It’s simply a series of events that happen to characters in sequential order– the end. Which, you know, is not a good thing. Theme needs to be there! Every story has a theme! Every book is really about something other than the original plot. The Great Gatsby isn’t about a rich guy hooking up with a girl from his past in the 20s. It’s about how power corrupts, how we act different when in the spotlight, and how all humans are animals. Game of Thrones isn’t about dragons, sex, and blood. It’s about how every man dies, we are all mortal, and men will always thirst for more power. Star Wars isn’t about Jedi. It’s about how emotions can be our strongest source of power, how family matters, and how discipline and wisdom are rewarded where as anger and greed are punished. You get it, right? Themes are important. And my story had none.

“How is this possible,” you ask? Let me explain my thinking. In Stephen King’s book, On Writing (which is a book every writer should read), he mentions that when he writes he doesn’t come up with the theme. He simply writes the story and when he’s done he goes back to reread it. As he’s rereading it, he looks for common ideas and things he subconsciously kept adding in the story. Then he edits and revises the story to highlight those common ideas and draw them out further into realized themes. I tried doing this in my novel to no avail. There are some ideas to draw from, but very few. That’s why I say it’s salvageable, it’s not a complete waste. i spent so damn long on this story, and it’s a pretty good read… aside from its missing themes. I’ll keep it on the back burner.

“So, what now,” you ask? Good question. For starters I now know why so many authors say it took them years of writing before they made a big sale. Some of my favorite authors wrote dozens of books before they sold even one; Brandon Sanderson being one notable figure. He wrote something like 16 books before getting published, and now that dude is one of the most prolific authors out there. So, I started another novel project. With each story I finish I learn more and more about what to do and what not to do in my writing. This past project I learned theme and a lot about outlining and characterization, as well as finally determining my voice.

The current project I’m working on is up and running and I’m 6 chapters in. A lot is still up in the air, but as always I’m excited as I write it. However, I can’t focus on writing it very much at the moment because of my day job. I’m working as the lead editor for a magazine in Florida that is all about health. It’s magazine titled Indo Wellness Magazine. It’s something I’m quite passionate about and now that we’ve gained more support and backing I feel fine writing about it here. If for some odd reason you’d like to check it out, hop on over to twitter and check out @indowellmag or go to our Patreon page here.

That’s all for this update. I’ll be back to posting reviews just as soon as I finished this insanely long fantasy series I’m working through…

2 thoughts on “The Wrong Way to Write”