Welcome to another edition of In My Opinion Reviews, where I’ll be telling you all about a book you definitely shouldn’t read… In my opinion. 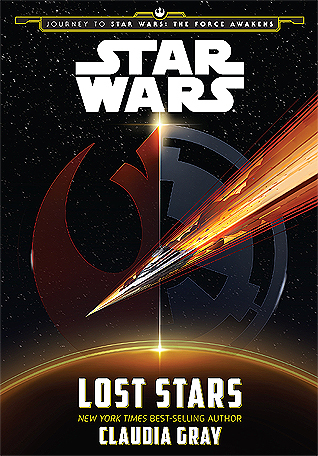 Lost Stars is part of the new Star Wars cannon, and therefore I must read it. I have a fairly impressive collection of Star Wars books already, but unfortunately they are all from the EU which means they are basically obsolete. With the new Star Wars getting its gears rolling, and me being the die-hard Star Wars fan that I am, I feel I have to keep up with the new stuff in order to continue calling myself a fan. That said, if this book wasn’t Star Wars, I wouldn’t have gotten halfway through it.

Lost Stars takes place during the years of the early Empire, shortly after the fall of the Republic, and goes all the way up to basically right before The Force Awakens. It follows two characters who have known each other from childhood as they enter the Imperial Academy and live their lives for the Empire. As the events of the original trilogy unfold, each of the characters deals with it in their own way and we see two different sides of the war; the Rebellion and the Empire.

Sounds kind of promising, right? Wrong. This book quickly turns into a romance novel as the two characters start to realize they’re more than “just friends” and explore their feelings for each other. Also, the author, Claudia Gray, is known for being a very good Young Adult author. Not Adult author. So this book reads like it was meant for a middle schooler to understand. Let me break it down for you:

PLOT: Like I mentioned above, Lost Stars follows the paths of two characters, Ciena Ree and Thane Kyrell, as they meet the Empire for the first time as nine year-olds on their backworld planet and are awed by the power. They become some of the best pilots the Empire has and get accepted into the Imperial Academy on Couresant simply because they’re so darn good. At this point in the story, which is barely a 1/4 of the way, the progression of the story slows dramatically and it becomes… not a story anymore. There is a rule that writers are encouraged to follow called “Show, don’t tell.” You’re supposed to show the reader what is happening in a scene, not just tell them.

“Henry’s breaths came short and rapid as he stomped along the corridor, his boots echoing harshly against the pale walls. He jammed the button for the elevator so hard he felt part of it give way. He didn’t care. He cracked his knuckles and rubbed his hands as he waited, trying not to hear the blood rushing in his ears. When the elevator finally came and he stepped inside, the two passengers already in it could tell he was in no mood to talk, so they zoomed past dozens of decks in silence. Henry brooded the entire way. As soon as the doors opened, he stormed out and headed directly towards his station, ignoring the waves from his partner.” – Showing.

So much of this book was Telling instead of Showing. The reader is just fed a series of events that somehow link together instead of being shown a story that they can weave and imagine in their own minds.

CHARACTERS: The characters were probably the only good part of this novel. Though they didn’t really grow that much throughout the story, and most of their thoughts and convictions were very predictable and transparent, they weren’t really bad characters. The banter they had was done well and dialogue wasn’t stale or forced. I didn’t like how Claudia tried to fit in famous members of the Rebellion or the Empire just for fun in some places. Like, just so she could say that she wrote about Grand Moff Tarkin or Han Solo having anything to do with these totally random characters. But, whatever.

IMAGERY: I already said it, but Claudia never used “Show, don’t tell” throughout the book. She just went from one event to the other with her characters in it. She didn’t even research that much detail about the Star Wars universe. Though the characters were stationed on the Death Star, The Executor, The Infiltrator and other famous Star Wars vessels, the author never described them in any more detail than just cosmetic- what’s on the surface. So much of Sci-Fi is defined by its setting the difference from our own reality. She did a poor job of capturing that for the reader.

VERDICT: In case you haven’t figured it out already, don’t read this book. It reads like a glorified Star Wars fan fiction. As if the author had these characters and thought, “Wouldn’t it be cool if I took all the most iconic scenes from the original trilogy and told them through the eyes of two random people in the background? People that somehow manage to be at, and survive, every single battle and dramatic moment through the war and interact with famous characters at every turn? Yeah, that’d be cool. But it needs to be a romance. And easy enough that pre-teens can read it. It’ll make millions….” This is a bad story poorly told.

In My Opinion, unless you like Young Adult Romance novels, do not pick this book up. If you’re a die-hard Star Wars fan like me and feel the need to gobble up all Star Wars related content just because, then Wookiepedia the story or just message me. Between me and the internet you’ll get a much better experience than I had. In My Opinion.